Summary: Basic information about carboxytherapy and its new use in non- invasive aesthetic
medicine and in dermatology are presented in the article.
Key words: carboxytherapy, carbondioxide - CO2, vasodilatation, Carbomed.

Carboxytherapy – therapeutical injectional application of carbondioxide - is used in balneotherapy from 1932 (for the first time in French spa Royat). In 1953 cardiologist Dr.J.B.Romuef published a report about his 20years´ long experiences with the method. Patients in our country know the technique as „plynové injekce“ – „gas injections“. For its antalgic and spasmolytic effects carboxytherapy was from the beginning successfully used as a treatment of arthropathies and vertebropathies and as a possibility to influence the tonus of arterioles and capillaries, followed by improvement of the trophics (in the treatment of vasopathies including ischemic disease of lower extremities and peripheral diabetic syndrom). Even systemic effects of carboxytherapy are quoted, like dilatation of coronary vessels, bradycardia and dicrease
of blood pressure. Carbon dioxide in the tissue reacts with molecules of aqua, generating molecular carbonic acid, which reduces pH of the tissue. On the base of Bohr´s effect (in lower pH the binding between
hemoglobin and oxygen is weaker) the oxygen release from hemoglobin increases, at pH 6,8 and less permeability of capillary wall is increased, at pH 6,5 and less the elasticity of collagen fibres increases and their rigidity dicreases. By reduction of diatomic calcium ions and by dissociation of carbonic acid to H+ and HCO3- generates calciumhydrogencarbonate – Ca (HCO3)2, also natriumhydrogencarbonate and
kaliumhydrogencarbonate are generated (NaHCO3 and KHCO3), pH changes to basic and leads to antalgic and spasmolytic effect. The tonus of arterioles and capillaries is released (skin temperature increases up about 1°C), which together with the change of activity of neural endings participates on improvement of the trophics of treated site. (1.) In the same time oxidation of lipids from adipocytes is activated, in some sources is stated direct lipolytic effect on adipocyte (2). The rests of CO2 are then again breathed out by the lungs.
Fysiotherapeutical literature accentuates reflex base of this therapy – we purposefully influence reflex response, which has therapeutical nature (3), this point of view is in aesthetics totally omitted. Next, the influence of endorfins and other mediators secretion is mentioned, via stimulation of acupunctural points (and perhaps also placebo effect coming after any treatment by special device, by a special method etc), it is thought also about the influence of limbic system (Capko, Kolesár) as a starter of adaptive mechanisms in reaction of the organism to outer enviroment factors. During last years surprisingly new possibilities of use of carboxytherapy were found in noninvasive aesthetic medicine and dermatology. In Europe the reasearch is centered in the university in Siena and at the Centre of microangiology and microcirculation at the university of Milan. In many countries (Australia, Korea, Singapur, South American countries) the method is widely presented and used.
Now carboxytherapy comes to our country via Austria and Hungary. The use of the method in dermatology and aesthetic medicine is very versatile:Contraindications of carboxytherapy are severe disorders like severe ischemic heart disease, acute embolism, trombophlebitis and phlebothrombosis, gangraena, renal failure, decompensated hypertension, the state after cerebral apoplexy including transitory one, pregnancy, nursering.

The use of the method in dermatology and aesthetic medicine is very versatile:

Carboxytherapy is indicated also in the treatment of psoriasis (can be combined with traditional dermatologic treatments), circumscript sclerodermia and alopecias.

2. Changes of pH and improvement of the metabolism resulting in temporary vasodilatation and building of collaterals is able to lead to the rebuilding of intradermal collagen. This effect comes

relatively quickly (clinical improvement is visible usually after 2 treatments performed during e.g. 7-14 days). The tonus and appearance of the skin is significantly improved („tired“ areas like

abdomen, arms, inner thights, double chin, perioral area, even lower eyelids – in the face it is necessary to apply the gas very carefully) and improves the appearance even of old striae.

3. Improvement of the metabolismus in subcutaneous tissue leads to gradual improvement of e.g. fibrolipodystrophy (so called „cellulite“), of the base even of older scars incl. the scars after burns,

very valuable is releasing of subcutaneous adhesions created e.g. after not ideally healed liposuctions or after other kinds of surgery (here surely also the speed of gas instilation plays the

role – mechanical influence of the gas flow). Also in fibrolipodystrophy we in fact desintegrate and soften harder septae of connective tissue among adiposal lobuli. In subcutis occurs also lipolytic

effect, which can be well used for targeted non-invasive contouring of problematic areas – e.g. outer or inner thighs, flanks, abdomen. The advantage is paralel influence on the tonus of the skin,

which we can´t see often after other non-invasive techniques. However lipolytic effect comes the most slowly, the first results can be usually seen around 5-10 session. As in the case of other

methods of non-invasive body contouring (electrolipolysis, injectional lipolysis by phosphatidylcholin/deoxycholate or so called hypotonic injectional lipolysis), also here certain percent of „non-responders“ exists, that means the patients who don´t react for the treatment, probably thanks to individual setting of metabolism, receptors´ singularities etc., if the reason is not simply in unhealthy style of living and impossibility of the individual to change this. For application of carbondioxide in dermatology and aesthetic medicine the device Carbomed is designed (by Italian company Carbossiterapia Italiana). The machine is connected via a tube with reducing valve directly to the bomb with medical grade CO2. The gas comes under the pressure 2,5- 3,5 bars (i.e. 250 000-350 000 Pa, 1875-2625 torr), the parametres for the application iteself (flow of the gas in ml/min, total amount in ml) are adjusted individually according to the indication and site of the application. We apply by tiny mesotherapeutical needle 30G (gouge), the longness of the needle is 12 or 13 mm, the instilation process of the gas is controled by foot switch. One treatment lasts typically 20-40 minuts, depending on the number of treated areas. The overall amount of instilled gas is in treating body areas approximatelly 200-1000 ml, in the face 5-50 ml (in physiotherapy smaller amounts are used, typically 20-200 ml in one session). The patient can have various feelings and sensations in the application site – warmness, tingling, burning, as a result of analgetic effect of CO2 (depolarisation on neurons´ membranes) these sensations usually tend to fade soon, in very sensitive individuals they can be very rarely percepted even till 24 hours after the application. If possible, it is necessary to avoid the application into the vessel, however, by coincidence sometimes it occurs, then easily small hematoma develops. Depending on the indication the patient sees positive effects of the method often as soon as after 1-2 sessions, however in body contouring after 6-8 sessions. If applied on the body, at least 10 sessions are recommended, performed once or twice a week, then according to the state and results. Influence on psoriasis, alopecias and leg ulcers can take longer time, 20-30 sessions is not an exception. The method is so versatile and among clients who had a chance to try it so popular for its effects, that its spreading surely gives much good, even there, where otherwise we would have to stay with not always satisfying combinations of less effective treatments (treatment of scars, leg ulcers) or with invasive surgical methods (improvement of facial skin tonus, liposuctions), which however often bring a new problem (new scar or subdermal adhesion). Also financial point of view is significant, CO2 gas is cheap, the price for the treatment doesn´t reach the prices of other methods and the result can be comparable. Carboxytherapy and the device Carbomed can be recommended to all aesthetic and plasticsurgerical centres and to bigger dermatological departments. As it is trendy in our era, an independent international society for the research in carboxytherapy was established in Siena (Italy) (G.I.S.C. - International Scientific Carbondioxide Therapy Group). There is not many sources about the method even in physiotherapeutical literature, about its use in dermatology and aesthetics the sources are minimal. Detailed explanation of complex CO2 influence in the tissue may be very difficult to expose, the gas acts very quickly, histopathology and other routine methods (ultrasound for materialization of fibrous layers, evaluation of microcirculation by Doppler) are useful in following the results, but are not enough for precise explanation of the process, tissue culture is a model, arteficial enviroment. The centres specialised for plastic surgery and private aesthetic centres usually don´t have possibilities and armamentarium for such research. The field is surely very interesting and perspective, there is also a possibility of connection of our specialists to G.I.S.C. society.

4. Brandi C. et al.: Carbon Dioxide Therapy: Effects on Skin Irregularity and Its Use as 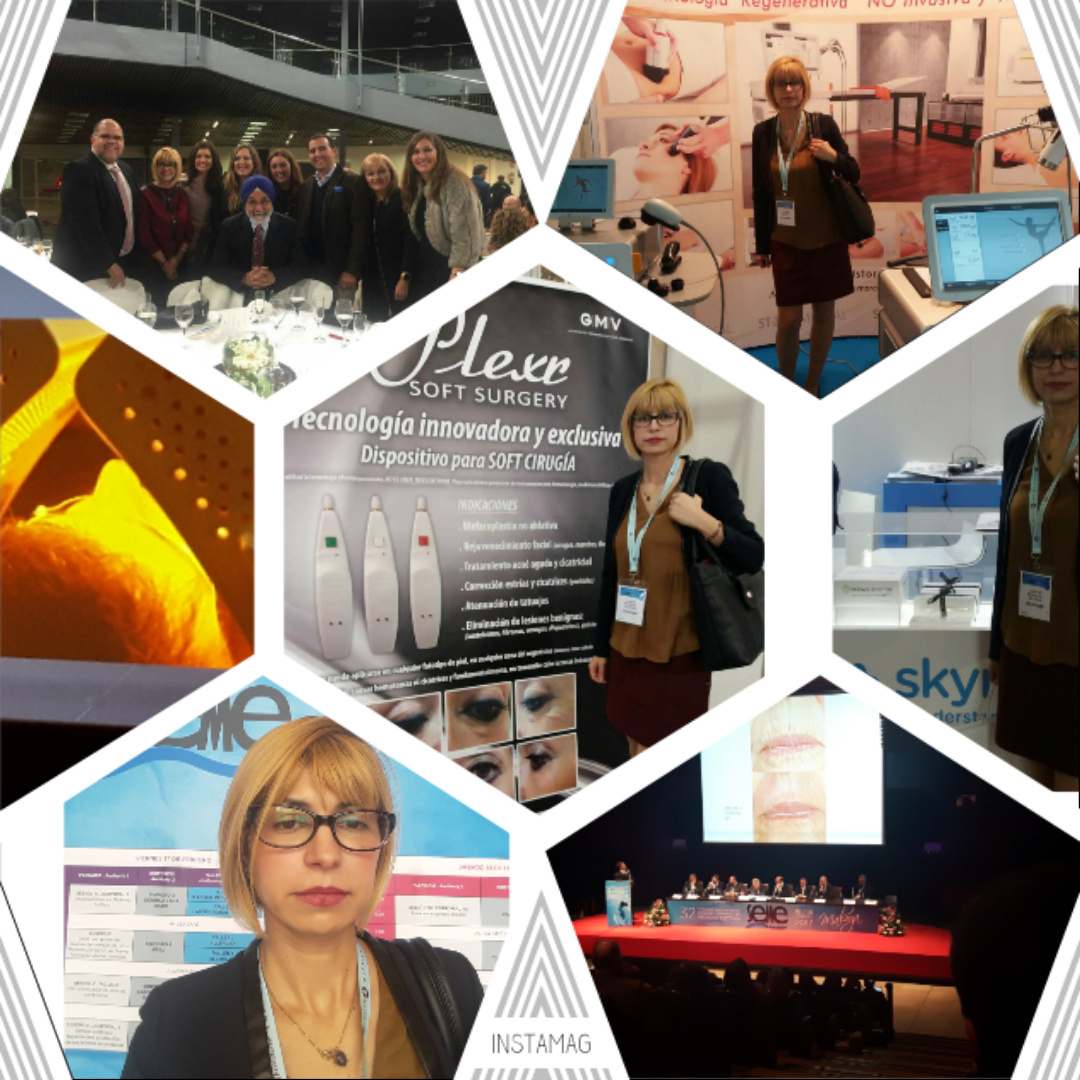